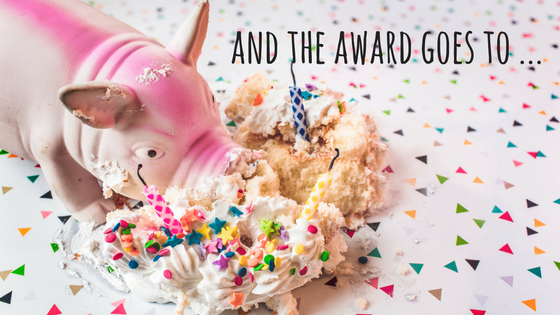 Giving your workers awards to celebrate their hard work is a great way to improve your employee recognition efforts — and by extension increase engagement. The ceremonies where these awards are given out can double as great team-building opportunities too.

But there’s no rule that says you can’t give out awards that are just for fun. Here are 12 more humorous awards that can be given out to your team members (or at least get you thinking about similar awards to give out):

Is there someone in your office who’s always fixing things — printers, light fixtures, coffee machines, what have you — even though it’s not in their job description? Quick, give that person the MacGyver Award!

Odds are someone on your team just seems to not have the best sense of time. Maybe they show up late every day. Maybe they’re always the last person to show up for a team meeting. This person deserves the Space-Time Continuum Award.

No matter what dress code your company has — or even if it doesn’t have one in the first place — there’s someone who takes their wardrobe game to the next level more often than not. They’ve earned the Fashionista Award.

One of the members of your team is — how should we put it — a little more disorganized than everyone else. Give them the Pig Pen Award, which is named after the dirtiest Peanuts character.

On the flip side, there’s someone on your team who keeps their work space immaculately clean — to the point where people say something about it. Give this person the Mr. or Ms. Clean Award.

Some people always make sure the rest of the team has something tasty to munch on. Recognize this person’s culinary skills (or their commitment to buying treats) with the Snack King or Snack Queen Award.

Is someone on your team harder to track down than seemingly everyone else? Well, no one’s found the Loch Ness monster yet, either.

When you need to track down a stapler, an extra pad of paper, or a pencil sharpener, you know you can always count on that team member who seemingly has every office supply known to man stashed away somewhere nearby. Office supplies go to this person’s desk to disappear. They deserve the Bermuda Triangle Award.

Who has the most plants — that are still alive — in their work space? This person obviously knows a thing or two about gardening. Give them the Green Thumb Award.

Someone on your team talks more than anyone else. You all know who that person is. Give them the Chatty Cathy Award.

Some people can’t help it. They’ve just got to sing. If one of your colleagues holds the proverbial microphone more often than everyone else, recognize their talents with the Opera Singer Award.

No, this award isn’t necessarily given to your best graphic designer. It’s given to the person who’s the best at drawing and doodling to the point that everyone takes notice. Give the Picasso Award to your most prolific artist.

One-off awards may not be the best choice for you as it requires certain actions and it’s easy to lose track of things. In fact, it doesn’t have to be that hard. Employees should be able to recognize a job well done when it happens in real time. We found in The Surprising Effects of Employee Recognition and Appreciation that 44% of employees give regular peer-to-peer recognition when they have a tool that makes it easy.

Give your team the opportunity and encouragement to recognize one another, so everyone is invested in the process! Learn more about Cheers for Peers. Better yet, book a demo to see it in action.