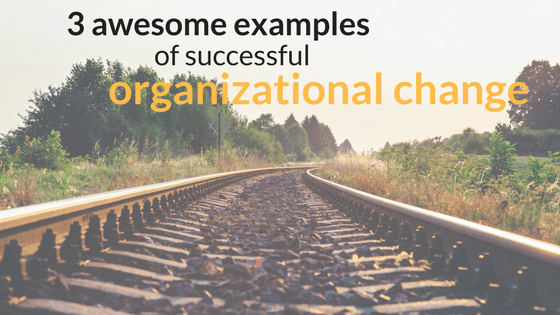 Organizational change is one of the riskiest, most earth-shaking things a company can do. But a successful reorg can set an organization on the path to future success like nothing else can.

It’s a radical move, but often it is the only way to truly shake opportunity loose, whether a company is struggling or looking to maintain its momentum. A reorg requires vision and flawless execution — or at least as close to that as is realistically possible — but when it works, it’s a thing to behold.

Three reorganizations stand out as inspiring examples of what can be achieved:

A key factor behind these transformations relates to a shift in the organization’s mission and values. To learn more about how to grow your business by defining your own authentic company values, feel free to download our

. (A handy Values Statement Template is included to get you started)

01. A new CEO turns a legendary company on its head

Why the reorg was needed: After the phenomenal and long-lived success of its Windows operating system and suite of Office products, Microsoft was struggling to write its second act. The gigantic company was stagnant and rife with turf wars between major business units that often viewed each other more as competitors than partners in the same company. 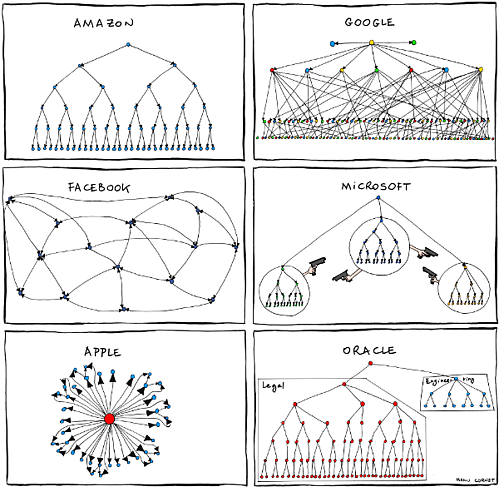 Innovation was being thwarted by a toxic environment that kept the company increasingly dependent on regular refresh cycles for Window and Office. As the world moved forward, with Google becoming dominant online and Apple owning the market for mobile products, Microsoft struggled to keep up, with unevenly executed new products (e.g., Zune) in which even the company soon lost interest.

What the reorganization was: After being named CEO in February of 2014, Satya Nadella undertook a major restructuring of the massive company to do away with the destructive internal competition. Products and platforms would no longer exist as separate groups, but rather all Microsoft employees would begin focusing on a limited set of common goals including:

In September 2016, Nadella shook things up again with the merging of the Microsoft Research Group with the Bing, Cortana, and Information Platform Group teams to create a new AI and Research Group. With about 5,000 engineers and computer scientists, its goal is to innovate in artificial intelligence across the Microsoft product line.

What they got right: As the reorg began, Nadella shared with employees a new sense of mission: “To empower every person and every organization on the planet to achieve more.” He recalled his thought process: “Over the past year, we’ve challenged ourselves to think about our core mission, our soul — what would be lost if we disappeared. . . . We also asked ourselves, what culture do we want to foster that will enable us to achieve these goals?” Prior to the restructuring, employees had been lacking a positive sense of purpose, with the result being low morale and weakened employee engagement.

Although Microsoft’s future does look brighter as a result of the still-ongoing reorg, perhaps its greatest achievement has already been realized: to offer the company’s employees a new sense that their work has real meaning.

02. Google splits up under the Alphabet umbrella

Why the reorg was needed: By the early 2000s Google was a phenomenal success, dominating internet search and making itself indispensable in our lives through products like Google Maps and Gmail. Its R&D teams were seemingly interested in everything, searching for what cofounder Larry Page termed “moonshot” projects, supposedly impossible things Google engineers could perhaps make real. From human longevity and autonomous vehicles to wearable tech, smart home devices, and artificial intelligence — the list goes on and on. Some things succeeded, some failed, and many haven’t left the labs yet.

Google as a company grew monstrously diverse. It was all connected, and yet not: an increasingly impossible entity to manage, with intertwining goals, teams, funds, and managers. Mindful of the troubling latter days of other once-great tech companies, Page decided it was time to deconstruct the entire thing.

What the reorganization was: Page broke up Google into its constituent parts, making each one its own company, with all of them owned by a new umbrella corporation called Alphabet. Page sits atop the structure as CEO of Alphabet, with Google cofounder Sergei Brin as president and long-time Google exec Eric Schmidt as chairman. Each of Alphabet’s companies has its own goals and a CEO focused solely on those goals. 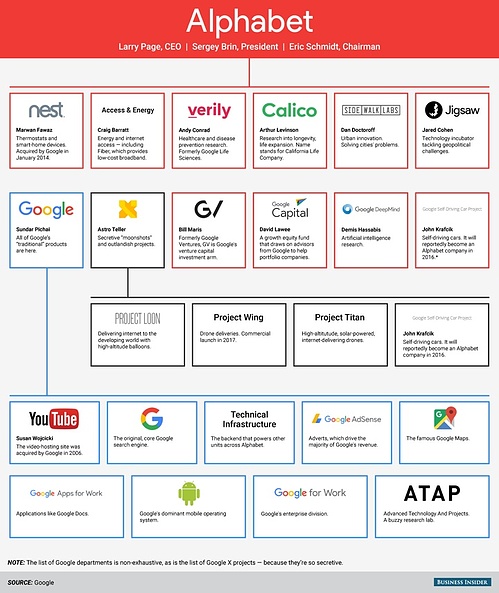 In a blog post, Page wrote, “Fundamentally, we believe this allows us more management scale, as we can run things independently that aren’t very related. Alphabet is about businesses prospering through strong leaders and independence.”

Page admitted the reorg was radical in the same post, saying, “in the technology industry, where revolutionary ideas drive the next big growth areas, you need to be a bit uncomfortable to stay relevant.”

What they got right: Page let everyone at Google in on his thinking when the launch of Alphabet was announced, explaining that the reorganization would free the employees to concentrate more productively and happily on their own mission without having to be concerned about Google overall. With each company responsible for its own expenditures and income, they’d also enjoy a new sense of cause and effect that could make innovating more meaningful. (Page has the power to funnel additional funding to an Alphabet company should the need arise.)

Why the reorg was needed: British Airlines is the largest airline of UK. It was created in 1974 from four other companies — BEA, BOAC, Northeast Airlines, and Cambrian Airlines — taking to the sky with 215 aircraft supported by 50,000 employees, a level of staffing that was, even then, viewed as precariously oversized. The oil crises of the 1970s shrunk the airlines’ customer base, and its huge staff resulted in massive financial losses. The company soon developed a reputation for terrible service as a result.

In 1981, British Airways brought on a new chairperson, Lord King, who noticed that the company was operating very inefficiently and wasting valuable resources.

What the reorganization was: To increase profits, King decided to restructure the entire organization by reducing its workforce from 59,000 to 39,000, eliminating unprofitable routes, and modernizing the fleet. He repaired the airline’s image by bringing in a new marketing expert. Within 10 years, the airline reported the highest profits in its industry: $284 million. 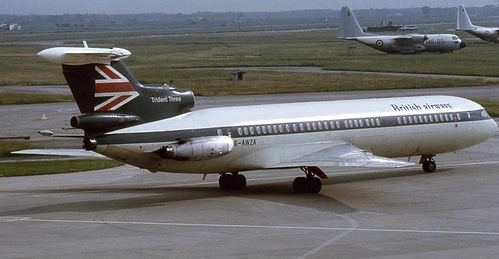 What they got right: Before King began announcing layoffs, he explained his reasons for the restructuring to the entire company to prepare them for the upcoming change. Without his transparency, British Airways could have experienced employee backlash and negative press around all the layoffs. But the chairperson always communicated honestly and frequently to manage the change.

These successful examples of organizational change are instructive and even inspiring. They show how courage and thoughtful planning can be rewarded when you put your employees first and help them through a period of upheaval by sharing with them your vision for their new roles and the future of the company.

A transformation won’t succeed without broad involvement, said Patti Sanchez in an HBR article. Indeed, employees from all levels have to be included in every stage of the organizational change in order to make it successful. One way you can keep them updated and get real-time feedback to make informed decision is to send a lightweight, regular pulse survey to understand how employees feel about the change and assign collaborators to make the initiative a concerted effort. Learn more about how you can open communication channels to build bridges and make employees happier and easier to manage during organizational change. 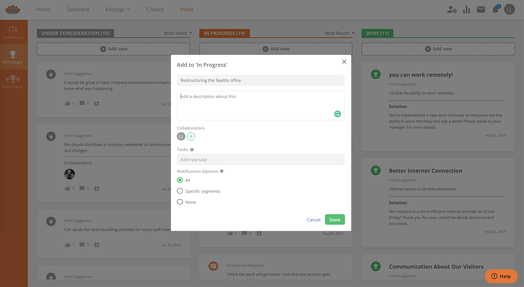