How to Fix Bad Company Culture in 6 Steps 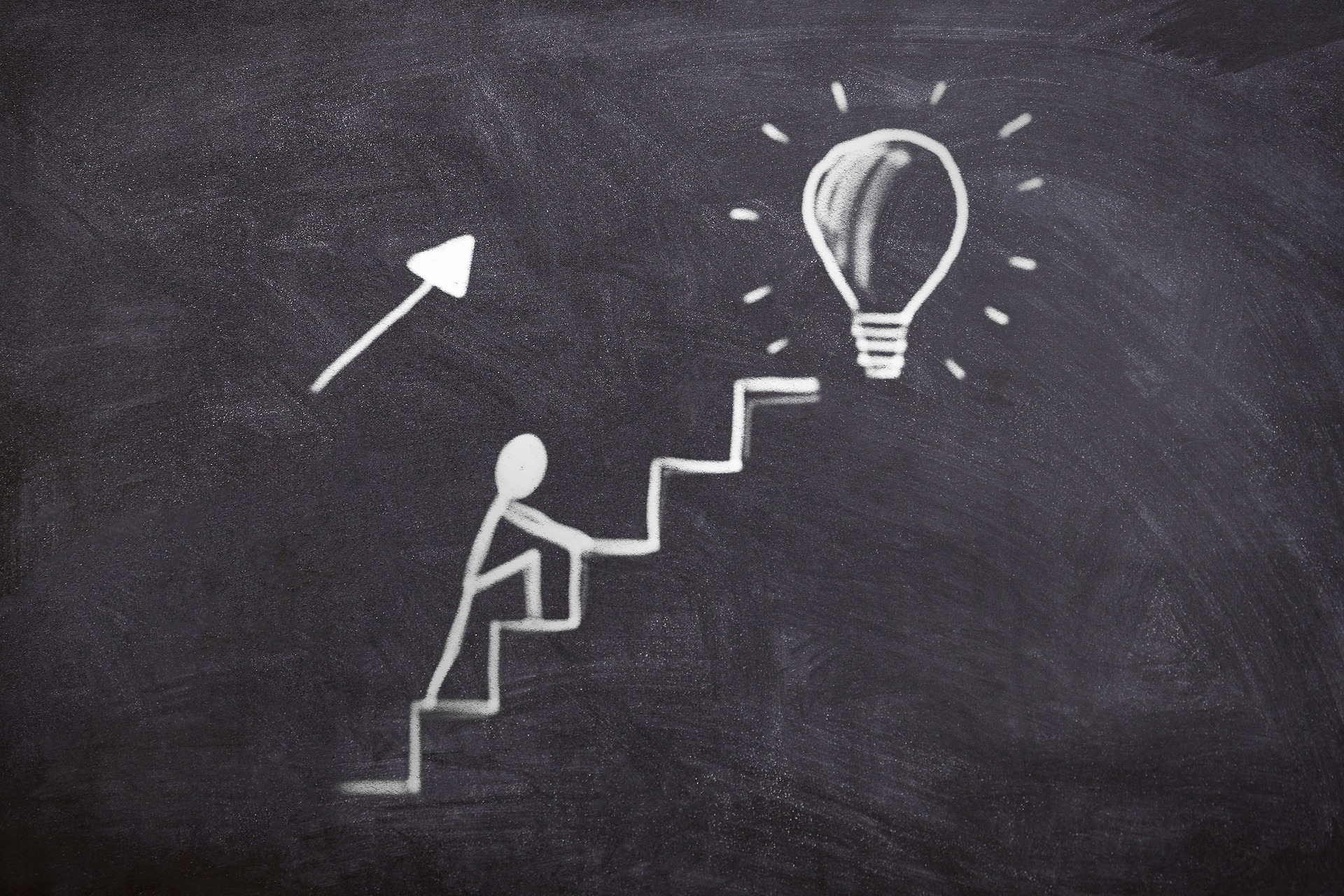 You’ve tried being stern with your employees. You’ve tried talking to the managers. And since that wasn’t enough, you also tried reinforcing certain behaviors. But, whatever you do, you just can’t seem to improve the established, bad company culture that pervades your organization.

In fact, research by Deloitte indicates that only 19% of executives believe that their organizations have good cultures.

If you’re on the verge of giving up and just letting culture take its course, keep reading. There’s still hope.

Let’s take a look at what it means to have a bad company culture, the potential reasons behind it, and—the best part—what you can do to turn things around.

What Does It Mean to Have a Bad Company Culture?

Before jumping into discussing the potentially negative aspects of organizational culture, let’s remove the ambiguity around the term “corporate culture.”

As previously stated in our company culture guide, the company culture definition boils down to this: the personality of the organization. This encompasses how employees and executives approach their work and interact with one another based on the values and beliefs they share.

With that out of the way, there’s no single definition of a “bad” company culture. All companies are different, after all. A trait that might be seen as inappropriate in one organization (or geographical region/industry) may be considered normal elsewhere.

Of course, there are certain characteristics that are generally perceived as toxic by organizations around the globe. Some of these include: 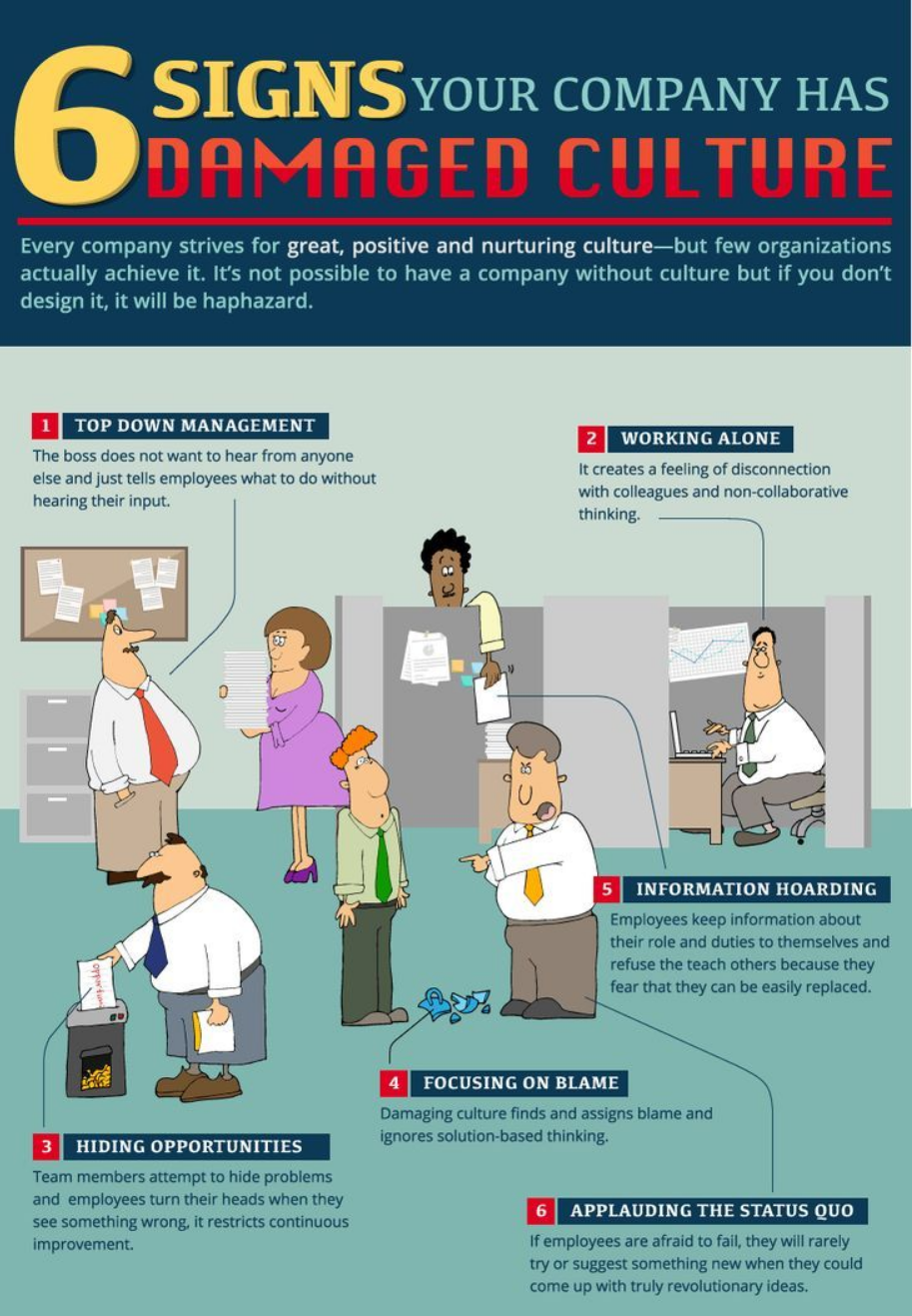 That being said, building a positive culture is—without a doubt—one of the most challenging aspects of management.

The Telltale Signs of a Toxic Company Culture

As a manager, it’s critical to keep an eye out for minor changes—even if your organization is doing great.

Between meetings and your daily raids of the office pantry, put on your company culture assessment hat and talk to your employees.

Look for minor details in the monthly, quarterly, and yearly reports. See if the teams are getting along.

Here are some classic telltale signs that may indicate you have a toxic culture.

If you see your employees jumping ship more often than usual (despite being offered competitive packages), it might be time to take a hard look at your culture.

Here are a few stats that link company culture with retention: 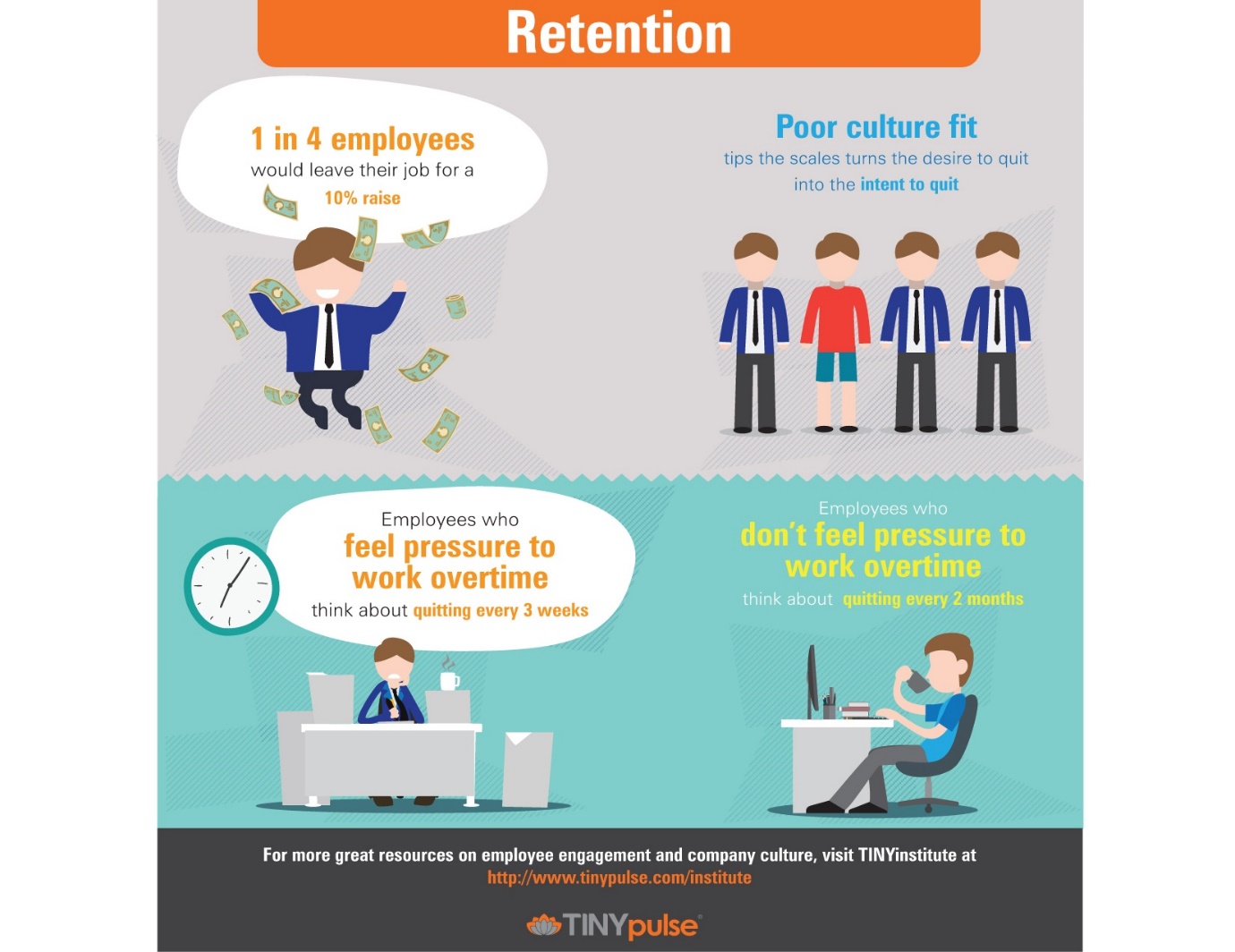 A high employee turnover rate is the most common symptom of a company culture gone bad.

In fact, our 2018 Employee Retention Report found that 26% of employees surveyed were more likely to quit due to a lack of respect among colleagues. 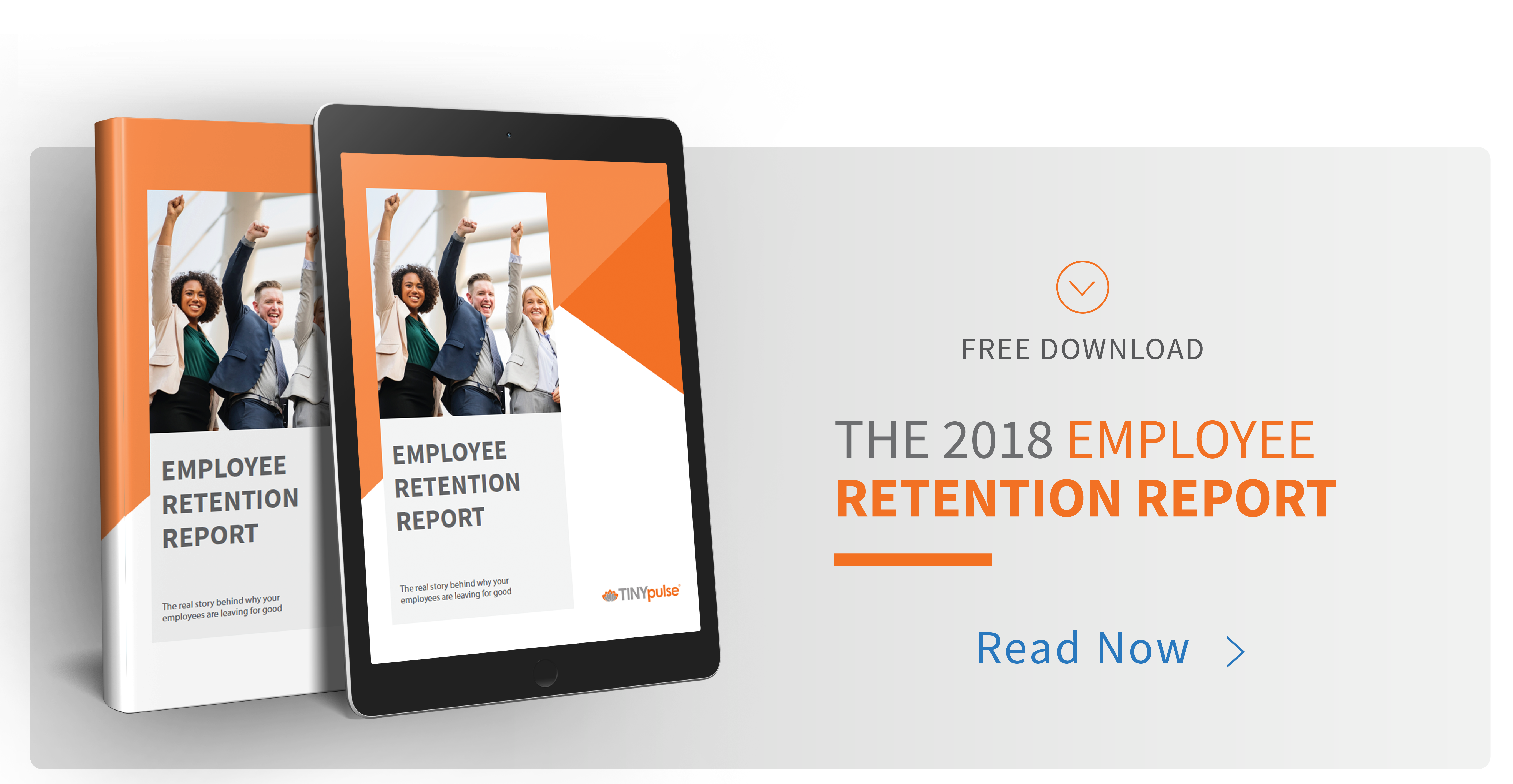 2. Lack of Cooperation Among Teams

Another classic sign of poor company culture is a lack of cooperation between employees and peers.

If you often find yourself resolving conflicts, dealing with missed deadlines, or correcting errors, the culture might be to blame.

If your employees don’t value teamwork—which includes sharing the workload, bouncing ideas off one another, and lifting each other up—your culture’s going in the wrong direction.

In our Guide to Employee Engagement, we’ve mentioned that an integral part of company culture development is having ample engagement.

This implies that—without a solid, positive culture and a lack of engagement—performance levels take a dip.

Don’t take our word for it. Research shows that disengaged employees collectively cost U.S. companies upwards of $550 billion each year!

If you notice a decline in the satisfaction levels among your employees, it could very well be a result of company culture problems.

The following infographic from DesignTAXI shows the devastating effects unhappy employees bring to the mix: 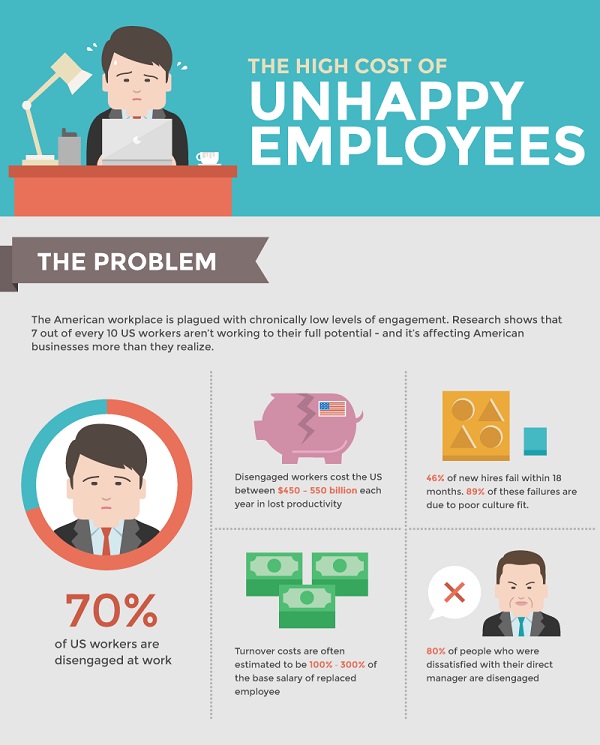 A toxic culture impacts how employees approach and view their jobs.

You can use an employee feedback tool, such as TINYpulse, to stay in the know of how your employees are doing.

After all, knowing how to leverage employee feedback during organizational change is crucial since it will help you work on the areas that actually require changes.

Last but not least, you have to keep an ear out for office gossip—which is the most classic sign of bad company culture.

However, this isn’t something that you can measure with a survey.

This will require mingling with the employees, being observant, and looking out for negative remarks.

The 3 Culprits Behind Bad Company Culture

Once you’ve decided that your organization’s culture isn’t how you’d like it to be, the next step is to identify the culprits.

There could be many factors hindering the development of your company culture.

The three usual reasons include:

1. A Lack of Clarity on Core Values

Your company’s core values are the beliefs on which the foundations of your business—the day-to-day behaviors and interactions of employees—are based.

They’re also reflected in your company’s mission and vision statements.

In a way, core values can act as seeds that sprout into a solid culture.

For example, the company culture at Google is based on values like focusing on the user, being fast, and doing business without resorting to cheap tactics.

The important bit is clearly communicating these values to the employees.

If you haven’t been clear on your core values yet, there’s a good chance that your lack of communication is the main culprit behind a poor company culture.

Here are some interesting statistics, courtesy of kununu, that show the importance of being aligned with the company’s mission and having clarity on the core values: 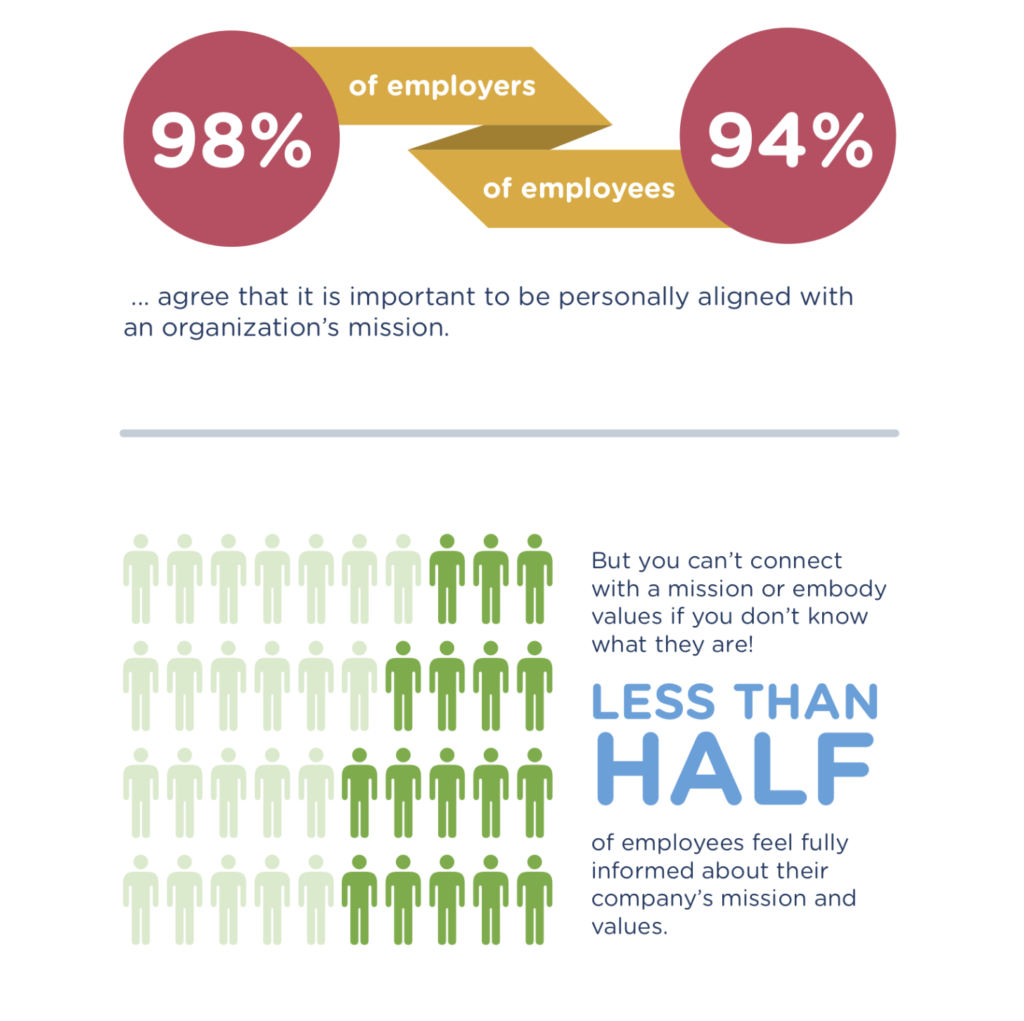 We’ll explore how you can go about fixing this later in the post.

The old adage “change starts at the top” still holds true to this day.

If the middle and line managers don’t care about your company’s culture and don’t practice your core values, how can you expect the other employees to do the same?

If it turns out that a few managers are to blame for the decline in the quality of the company culture, you’ll need to act quickly.

The third most common culprit is inadequate feedback, which is a product of careless management.

When employees don’t receive ample critiques of their behaviors and performance levels, they eventually stop caring.

However, by giving priority to the right areas, you will experience positive changes. They might come slowly and gradually. But be patient.

With that in mind, here are some steps that you can take to turn your company culture around.

1. Create or Reassess Your Core Values

Let’s start with the basics.

Company culture and values are connected.

Before anything else, you need to take a good hard look at your company’s core values—or create them from scratch if you haven’t already.

Remember, including relevant questions for employee satisfaction surveys is important. A few examples of company culture questions you might want to ask include:

Try to come up with a few more.

Keeping the ideal company culture, opinions of managers, and insights gathered from employees in mind, start crafting a list of core values around it all.

2. Communicate and Cement the Values

Some companies make the mistake of creating their core values but not communicating them to their employees and potential stakeholders.

Therefore, it’s critical to be clear on the beliefs that you’d like your employees to consider and adopt.

There are various one-time and continuous ways of how you can accomplish this:

There are two reasons why this is important.

Ultimately, it is more important for values to be understood and acted on than it is for them to simply exist.

3. Start with the Managers

As mentioned above, fixing a broken company culture begins with working on the management.

Try having one-on-one sessions with middle and first-line managers to discuss their beliefs and what they’re passionate about.

If the core company values aren’t being reflected in a manager’s day-to-day behaviors and performance, talk to them.

Clearly communicate what is expected of them and emphasize on the importance of the role they play in shaping the culture.

This is a no-brainer.

By actively seeking out the right people to join your company, you can decrease employee turnover rate in the long run and maintain a positive culture.

This is even more important when you’re hiring management. When you find yourself in that situation, you should look for candidates with certain leadership qualities.

However, this is easier said than done.

In the job listing, emphasize more on the soft skills than the technical skills required.

In addition to the competency-related questions, include questions related to your core values and the culture in interviews and/or preliminary surveys.

Additionally, you can also utilize personality tests to increase your chances of hiring the right person.

5. Reinforce Positivity in the Workplace

Now that you’ve laid down the law, it’s time to ensure that everyone conforms to the values.

The only way to do that is by reinforcing positive behaviors and practices by rewarding your employees.

Rewards could be anything—from an employee of the month award to a handsome monetary bonus.

Rewards will motivate your employees to go the extra mile and behave the way your company needs them to.

6. Gauge the Health of the Culture

In the end, remember the advice from earlier: stay vigilant.

From time to time, use surveys and include company culture interview questions to gauge where your organization stands.

Ask your employees about their opinions and general perspectives about the existing company culture.

Revisit it from time to time and tweak things whenever needed.

You can leverage regular pulsing to always be in the know of where your culture stands at any given moment.

Every business owner and manager dreams of a company with a stellar culture.

However, this isn’t something that you can accomplish in a month. Depending on where you currently stand, it may even take a year or two before you begin noticing any significant changes.

Needless to say, it takes patience and consistent, positive efforts to make it work.

However, by focusing on the underlying issues and taking the proper steps to ignite change, you’ll eventually shape the culture your company needs to get to the next level.