Every veteran eventually faces the same thing: the day they leave military service and venture into the civilian world to start the next chapter of their life. This is an exciting and uncertain period in a veteran’s life, where they’re thrown into the wild “real” world with only the skills they’ve honed as a service member. This transition period forces veterans to translate their existing skills into a value-add in civilian life and to figure out how they’ll engage the business community.

The process a veteran goes through in order to understand where their skills are valued and required in the private sector can take months or even years. It’s a process of self-discovery, devoid of the formal, regimented guidance veterans are used to having. Transitioning from active duty requires setting new civilian expectations for themselves, identifying how they want to use their skillset and ultimately picking a new career.

When transitioning into the civilian workforce, however, veterans often place unrealistic expectations on themselves and misinterpret the way society views them and their abilities. This misalignment of self-expectations and societal perceptions commonly results in a phenomenon known as imposter syndrome.

On the heels of the longest military campaign in our nation’s history, our servicemembers have spent many years in the cycle of constant deployment to some of the most complex, austere and hostile environments in the world. Since lives were on the line, they needed to be the best. They needed to be perfect. This level of seriousness and intensity doesn’t lend itself to praise for a job well done, but rather a sharp focus solely on ways to improve.

This focus permeates into other areas of servicemembers’ lives. As a result, they leave the military as a high-performing asset without understanding how their unique experiences have turned them into a very valuable asset to the rest of the world. Once they transitioned to civilian life, these veterans took the same mindset to work, constantly looking for ways to improve. This mindset is not only the reason veterans are seen as great hires, but also a major component of the imposter syndrome that many of them come to feel.

Young Marine officers are expected to set a very high standard of professionalism, train their Marines to accomplish the mission and have the wisdom and foresight to quickly adapt when plans inevitably go awry. While training for a mission, they are constantly refining small parts of themselves and their teams to be as close to perfect as possible. Excelling in these areas is not met with praise because you’re only meeting expectations.

Falling short of any of these goals or standards is met with critique, shame and the knowledge that you simply didn’t add up that day. These “failures” can weigh heavily on those whose bar is set at perfection. Success equates to things going as planned thanks to over-preparation. This causes veterans to believe their successes are attributed to the plan instead of their talent. They also tend to focus solely on ways to improve instead of considering all the things they personally did right.

Veterans then carry these mental models into the civilian workforce, which doesn’t always use the same measurements for success, failure and value. Veterans discover a different reality in the civilian world.

Since they want to begin pulling their weight as quickly as possible, veterans will often tap into their tendency to overwork. Although this elevated work ethic served them well in a previous life, it can become problematic when the amount of mental calories they burn on a task exceeds the amount required to do the job well. The military fosters intense competition, so many veterans leave the military with a subconscious need to excel.

This need can contribute to imposter syndrome when veterans enter an industry where they’re not yet as skilled as others and compare themselves to the exceptional, experienced talent around them. As a result, they can begin to feel incompetent by dismissing their own skills and abilities. This need to excel in the presence of high-performers mirrors their experience in the military and drives home the need to maintain a perfectionist mindset.

“Perfect” is the enemy

To make matters worse, those who experience imposter syndrome discount positive feedback from others because they view those comments as misaligned with their own perfectionist views of success. This can be especially true for veterans who aren’t used to compliments in their military life. In addition to discounting positive feedback, one can even rationalize why they don’t deserve praise or credit (it was luck, it was the process, it was the plan, etc.). As this cycle continues, so does the presence of imposter syndrome.

Ready for the good news? It’s definitely not all just doom-and-gloom.

Although symptoms of imposter syndrome can cripple productivity, many veterans have found a way for them to fuel drive and determination to succeed. Their maniacal pursuit of excellence can lead to a host of different outcomes, including becoming a powerful force to build a company, excel in academia or invent something new.

Dr. Chris Cancialosi, a former US Army Blackhawk helicopter pilot and managing partner of the consulting firm gothamCulture, told me, “I credit my imposter syndrome as something that has fueled my drive to succeed. I push through one goal and move right on to the next. I may not be the smartest person in the room, but I’m going to out-work everyone else to win because, at the end of the day, I don’t think I’m good enough to be here.”

This is a great example of using imposter syndrome symptoms to succeed and make a positive impact on other people’s lives. Although Dr. Cancialosi spent time and energy building this mindset, his perspective sheds an interesting light on how one can flip a potentially harmful mental model into an advantage. After all, these symptoms and mental models can become tools for success if you don’t let them go to extremes. Keep the chaos in check, because the most important 6 inches on your battlefield still lies between your ears.

For us stubborn veterans, recognizing the symptoms of imposter syndrome might be the toughest part, because they were once essential to staying alive. As we work to grow distant from that context, we should acknowledge the traits that are no longer needed and phase them out of our lives. Let’s face it: Lives are no longer on the line. We don’t always have to overprepare. The compliments from our colleagues, boss, family and friends are meant for us, and they’re real.

We don’t have to be perfect. We’ll never be perfect. We’re better off focusing on how lucky everyone is to have awesome people like us on their team.

It was never the plan. It was you. You were never an imposter. You were that good all along.

This article originally appeared on PeopleScience.Maritz.com. 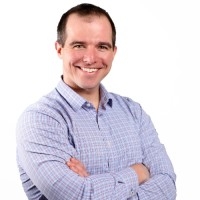 James is a former US Marine Captain who has held numerous leadership billets throughout multiple combat deployments to the Middle East. Since transitioning to the civilian world, James has gained experience in the franchising, technology and consulting industries.