Masterful Leaders – The Leader as Coach, Mentor and Teacher 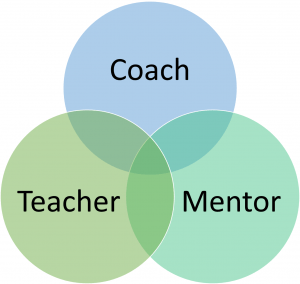 Among the many attributes a leader must possess, the most important is the ability to effortlessly transition from one leadership approach to another, in effect gliding between styles that best serve the developmental needs of those individuals they serve.  Truly masterful leaders know how and when to bring those approaches to bear.

A leader can be a mentor some of the time, a coach on other occasions, and a teacher when it is useful.  Think of the three attributes – Mentor, Coach and Teacher – as some of the most powerful tools in your leadership toolbox.

Each can serve the needs of others.  And notice that I intentionally don’t use the word “subordinate,” because we often are serving the needs of colleagues or team members and even bosses that have a desire to grow.  It’s an important distinction, especially considering that sometimes those we serve end up being in positions that might later have a higher “rank” in the chain of command.  In effect, we take turns leading others, but if the habits are there to help others on their developmental journeys, does it really matter what position she or he holds?  In that regard, I often use the famous Chaucer quote, “And gladly would he learn and gladly teach,” to remind myself and clients of that philosophy.

So what are the differences between the three styles of mentor, coach, and teacher?  It might be better to start with the similarities between them:

Now for the differences:

Each of the approaches has applicability.  The masterful leader can choose, with intention, which might best serve the individual’s needs.  That intention can even be verbalized if the leader has set the stage for her or his different roles.  “Let me be a coach right now and ask some questions.  Would that be helpful?”  Or, “As a mentor, let me just point out that there is a better way to navigate through that corporate game.”  And, “As a teacher, I can show you some ideas that might provide you some better skills.”

Oftentimes we use all three approaches in the same conversation, sometimes without knowing which one will best serve the person to whom the exchange is directed.

Perhaps the most powerful tool to decide your approach is this:  Simply ask permission.  “Would it help if I put on my _________ (pick one: coach, mentor, teacher) hat?   By posing that question, you establish your own intention, and, using the foundation of trust, you best serve another person.

In my coaching practice, I often get to know individuals who assume the title of manager who have not had the benefit of learning the basics of leadership.  Nor have they seen solid leadership modeled or explained.  The result is an individual relying on instinct, or perhaps following observed behavior that is extremely directive in its approach.  It is not uncommon for such individuals to bark out orders and expect compliance.  When subordinates push back, resistance builds for the leader, with escalation of tension building on a team.  Learning is dampened, as well as communication and trust.  Performance reviews become self-fulfilling prophecies and succession planning a non-starter.

The masterful leader, though, recognizes that those with whom they work depend on them to create an environment of learning, of inquiry and trust.  All are inherent in coaching, mentoring and teaching.  The key for the masterful leader, though, is to effortlessly glide through the various roles, assessing the situation, the time and the need to utilize and emphasize the various attributes.  By using all three roles of masterful leadership, the woman or man in a leadership position can better serve his team members, in the process improving the organization and his or her own capabilities.

Dave Bushy is an experienced executive who works with Boston Executive Coaches.

Credits: In 2018, I had the pleasure of being a part of a symposium about “Masterful Leaders,” at the Aviation Accreditation Board International (AABI), originally envisioned by their VP of Operations, Ceci Shirley.  My co-presenters included Greg Riggs, a professional coach from Novateur Partners and Mary Niemczyk, a professor at Arizona State University.  Our focus that day was the importance of leaders incorporating the best aspects of Mentoring, Coaching and Teaching as key attributes towards success working with their teams.  While there are of course many others, we concentrated on these three, as fluency in such capabilities are so important for a leader.